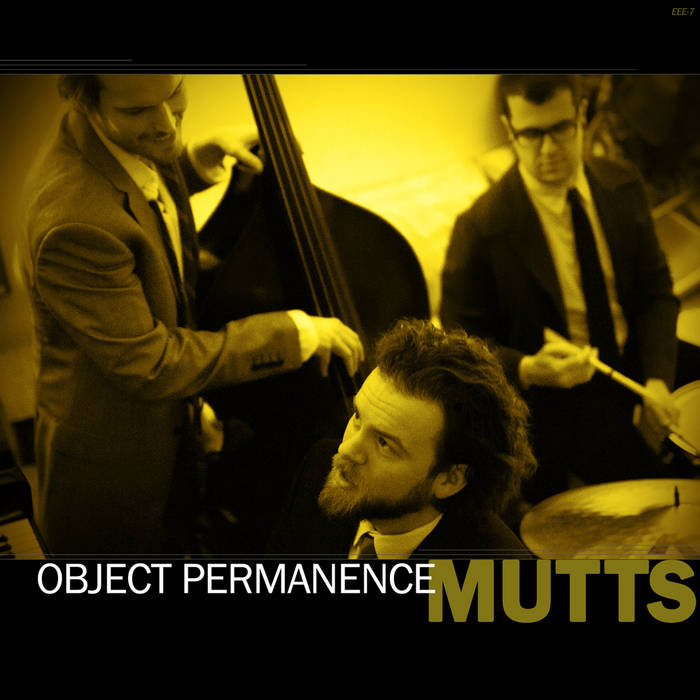 Michael Beaver Even when unplugged @wearemutts is still electric. Favorite track: Bury You.

To purchase Object Permanence on VINYL, please go to muttsmusic.com/store.


On the 3rd Mutts LP, the gritty trio from Chicago sheds amplification and goes clean. This risky move just makes sense for a band that wasn’t easily categorized to begin with.

The Big Takeover Magazine
Object is front-loaded with the band's bread and butter: four rollicking New Orleans barrelhouse blues/R&B and ragtime numbers. Early-going ditties like the jaunty, drunken sing-along "No One Left" and the carnival-like romp "If It's Hot It'll Sell" – a poke at mindless consumerism – showcase Maimone's phlegm-expelling, larynx-shredding, propane-gargling howl and sprightly, deep-toned piano/organ playing (he's joined on "If It's Hot" by Lying Delilah's soulful vocalist Jodi Rosenthal).
The album unexpectedly shifts gears from there, adopting a relaxed, late-night smoke-filled jazz/lounge ambience for most of its final two-thirds. The stunning, sentimental standout “Prizefighter” is indeed a prize, finding the hardened Maimone reluctantly absolving a straying girlfriend. On it, his still-hoarse, yet suddenly heartbreaking voice and gorgeous piano melody is accentuated by Hemmingbirds leader Yoo Soo Kim’s sad, swelling viola. - Mark Suppanz

Nashville Scene Magazine
Chicago trio Mutts' nimble, funky rhythm section, with Bob Buckstaff on the low notes and Chris Pagnani behind the kit, would be entertaining to watch on its own, but throw in growling, keyboard-wielding frontman Mike Maimone, and you've got a monster on your hands.
Object Permanence sees them unplugging their amps and digging into their jazz and blues roots, with Buckstaff scaling back to an upright bass and Maimone focusing on grand piano and organ. Comparisons to Tom Waits are inevitable, but more than just approximating one of Waits' styles or inhabiting one of his many characters, the band members use their own skills and world-weariness to develop an original take starting from Maimone’s perspective, from the bouncing "If It's Hot It'll Sell" to the pointed New Orleans R&B number "Pray Like a Vigilante" to the smoke-wafting closer "Uncivilized." - Stephen Traseger

Daytrotter
Mutts lead singer Mike Maimone seems like a man who can go from resting, from sitting on the couch experiencing little to nothing, to suddenly having his brain and everything connected to it light up like the Las Vegas Strip, like all of the pull machines and marquees hitting jackpots... He goes from zero to a hundred quicker than most... He'll just throw that barroom piano over into the corner of the room and rowdily bang on it as the flames climb the walls and get into the ceiling, where they can really begin their engulfment.
Mutts music embraces the inner turmoil, the things that are striven for, the ways that we fall short, the ways we're let down, as well as the few things that spark us back onto the right track, even if those are the rare moments, the briefest of comebacks. - Sean Moeller